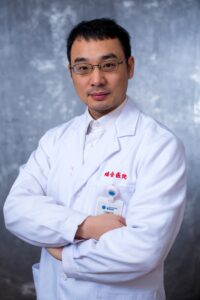 Professor Min Lu, of the Shanghai Institute of Hematology, is one of the leading authors of a recent research paper that reveals how the anticancer drug Arsenic Trioxide (ATO) can reshape some forms of mutant p53, (including mutations common in Li Fraumeni Syndrome), and that these reshaped p53 proteins can function again to fight cancer cells. Here he discusses with Pan Pantziarka some of the implications of this work for people with LFS.

PP: What is the position of people with Li Fraumeni Syndrome (LFS) in China? Is the condition widely recognised? Is there a central register?

Min Lu: To my knowledge, there is almost no research or epidemiological investigations for LFS in China. I have physically met dozens of oncological clinicians in China and only few of them aware this terrible disease. Zhizhong Li（李治中）, who is public-spirited and has returned to China from the US and has devoted himself to the science of children’s cancer in China, is one of the few people in China paying attention to Chinese LFS. We occasionally chat about the unmet need in studying Chinese LFS. He is also trained in a big US pharma company and, certainly, we also chat about the possibility of the application of Arsenic Trioxide (ATO) to treat LFS. However, there are many practical difficulties because of the lack of the identified LFS people in China and the common challenges in performing a clinical trial.

PP: Is it possible that periodic short-term treatment of people with LFS with ATO might be an effective way to reduce cancer risk?

Min Lu: I think we need to evaluate the balance of benefit and risk for this periodic short-term administration mode. You know, the balance of benefit and risk should be the most important (if not the only) determinant to decide whether to take a drug. To give an example, most of anti-cancer drugs (if not all) are toxic and lots of them can even induce de novo tumour occurrence. Since these drugs benefit cancer patients with acceptable adverse events (benefit > risk), they are approved for usage. Like other anti-cancer drugs, ATO is toxic. However, during the 1990s’ our Shanghai Institute of Haematology found that combination of ATO and trans-retinoic acid cures the extremely lethal APL leukaemia (the only cancer type cured by targeted therapy so far; 5-year survive rate is improved from 25% to >90%), so now the benefit is higher than the risk for ATO treatment for APL leukaemia, and ATO is now used to treat APL worldwide.

However, there are lots of scientific literatures showing the effects of oral low-dosage long-term ATO administration mode in humans and it is more reasonable to evaluate the balance of benefit and risk for this mode. 1) the risk of this administration mode. A paper in the Lancet tracking 899,811 people in an arsenic-polluted district for 13 years, they found 1 mg of arsenic per day can cause about 2.1-time cancer risk. According to an English cohort tracked for decades, 448-1891 mg arsenic treatment dose (equal to take 1 mg arsenic per day for 1.5-5 years) causes 0.38-time death risk from leukaemia, 3.07-time death risk from bladder cancer, and 0.95-time death risk from all cancers (this means lower death risk compared to normal people; however, this difference is too subtle to claim it is a really ‘lower’). Similar outcomes were reported in lots of literature. Conclusively, this ATO administration mode is apparently acceptable considering the fact that the risks from such ATO treatment mode (cancer occurrence risk is 2.1-time and cancer death risk is 0.95-time) are much lower than the risks from p53 germline mutation (use 45-year-old person as example, p53 germline mutations means 30.7-time cancer occurrence risk and 521.1-time cancer death risk).  2) the benefit of this administration mode. In the past 5 years, we have collected some experimental data derived from LFS mice upon ATO treatment, wherein we found the cancer onset of LFS mice can be delayed and the survival can be extended by adding ATO into drink water. The HR is about 0.7 (0.7-time risk of cancer death) and p is smaller than 0.01 so far. We think in the bodies of these treated LFS mice, the mutant p53 is efficiently converted into ‘wild-type’ p53 since ATO is so powerful in reactivating mutant p53 in labs. Its potencies in reactivating mutant p53 (increase p53 thermostability, protein folding, DNA-binding ability, transcriptional activity, and many other p53 activities) is over 1000-times greater than the reported mutant p53-reactivating agents in the labs that tested them.

PP: Do you think there is any possibility of investigating ATO as a cancer prevention treatment in people with LFS?

Min Lu: Like the answer to the above questions, I think scientists, clinicians and LFS people all need to consider the potential balance of benefit and risk before performing a trial. I have stated my opinion about the risk of such treatment in above questions, and the the potential benefit. We found cancer onset of p53-R280W and p53-R172H mice (equivalent to R282W and R175H LFS in humans, respectively) can be delayed by oral ATO administration daily by adding ATO to drinking water. However, we do not know whether it can completely prevent cancer occurrence in any of individual LFS mouse. About 20% of p53-R280W and p53-R172H LFS mice (less than 2 years old, they have not reached the lifespan of a normal mouse) still survive and they have no signature of cancer occurrence at present.

Meanwhile, the treatment necessity is also need to be considered. For a prevention treatment, the trial subjects are tumour-free people and the necessity is certainly lower than those with cancer. However, if the trial subjects are doomed to develop cancer one day, the necessity increases. We have systematically evaluated the cancer risk of LFS people (from IARC) with different p53 mutations. We found R282W mutation is associated with very high early cancer onset risk and cancer death risk thus there is higher treatment necessity for R282W cohort. However, some mutations such as those only slightly destroying p53 are not associated with high risk and these cohorts have lower treatment necessity for treatment.

A challenge in prevention treatment is the difficulty in setting primary endpoint for the trials. It takes very long while to reach any efficacy-related endpoint with statistical difference. Pan, I think your The George Pantziarka TP53 Trust, ReDO project, Anticancer Fund and/or others may help in setting such prevention treatment trial, if it is performed one day.

PP: You are working on mouse models of LFS using ATO. Can you tell us a little bit about this work? When will you be in a position to publish?

Min Lu: You know, working with LFS mice takes several years, particularly when you want to know the lifetime of a mouse. We identified ATO as effective mutant p53-targeted agent 6 years ago and then began the LFS mouse project 5 years ago. We have been studying the cancer spectrum, lifetime, cancer metastasis, the underlying molecular mechanism for why some mice benefit from ATO a lot while some do not for the past 5 years. We expect to publish this data in about 1.5 years.

PP: You are working on other compounds that also reactivate mutant p53. Are these new molecules or existing drugs that can be repurposed?

Min Lu: They are also existing drugs. Some are FDA-approved and some are not. We identified these drugs as mutant p53-reactivating agents 5 years ago. However, as a scientist, we hope to collect sufficient and solid scientific evidence before claiming they are mutant p53 reactivating drugs. You know, we identified ATO as a mutant p53-reactivating agent 6 years ago. Firstly, spent 2 years on persuading ourselves that ATO’s ability to reactivate mutant p53 (increase p53 thermostability, protein folding, DNA-binding ability, transcriptional activity, and many other p53 activities) is superior to the existing mutant p53-reactivating compounds by several orders of magnitude. Secondly, we spent another 3 years on solving the co-crystal structure of the arsenic/p53 complex, and, so now we can tell people and scientist peers how various p53 mutants can be reactivated by ATO. Coincidently, our discovered that the atom-level mechanism how ATO reactivates mutant p53 is very similar with how ATO reactive PML when curing APL leukaemia. ATO binds three cryptical spatial-close cysteines in both mutant p53 and PML-rara, and thus change their conformations, thus kill cancer cells. You know, in the scientific field it is still hard to believe an anti-cancer protein (so-called tumour suppressor, such as p53 and PTEN) can be reactivated by a drug. Tumour suppressors have been considered as ‘undruggable’ historically. By showing the co-crystal structural evidence of how a tumour suppressor is reactivated, we hope to change the dogma of the ‘undruggability of tumour suppressors’. Thirdly, the robust ability of ATO in reactivating mutant p53 is widely observed in academia and in industry (some mutants such as V272M mutant can be promoted with transcriptional activity by ATO by over 200 times in some labs), we thus think it is time to publish the data, claiming ATO is a p53-targeted drug in the end of 2020.

Luckily, all of the above scientific challenges have been solved for these new mutant p53-reactivating molecules. We are testing these molecules in primary cancer patient samples. We expect to publish the data for these new molecules by the end of 2021.

PP: Much work is being done looking at metformin as a way of reducing cancer risk in people with LFS. How does that fit with the work you are doing? Is it complementary?

Min Lu: My group normally relies on three go-to criteria to evaluate a targeted drug: availability of co-crystal structure, structure-activity relationship, and target specificity in cells. We only consider drugs meeting all these three go-to criteria as a drug with clear mechanism-of-action (MOA). I am not familiar with metformin but, in my memory, the MOA of metformin in treating cancer cells with mutant p53 is not very clear. Thus, despite the clear MOA of ATO in reactivating mutant p53, we do not know whether metformin and ATO can be complementary in treating LFS cancers.

Min Lu: Before the end of interview, please allow me to emphasize a fact that not all p53 mutants can be reactivated by ATO. We expect that many ATO-p53 trials will be started for cancer patients in the coming years, at least in patients with somatic p53 mutations. There are over 1000 p53 mutations reported and these mutations destroy p53 in so different ways. Thus, it is logical (and also experimentally confirmed) that ATO can’t reactivate all of the p53 mutants. In 2019 we initialized a large project named PANDA (P53 AND Arsenic) cancer project, wherein we test the ability of ATO in reactivating about 1000 p53 mutants for their transcriptional activity, anti-proliferation ability in cancer cell lines, and anti-tumour growth in xenograft mice. The progress of the PANDA project is about 90% today. We expect we can publish this data in early 2022. We may show oncological clinicians the list of p53 mutations that can be reactivated by ATO before publishing data. Again, it lacks rationale to use ATO on an arbitrary p53 mutation without experimental evidence. We published our proposed precise clinical trial mode of ATO for p53 mutations in a scientific journal (https://academic.oup.com/jmcb/advance-article/doi/10.1093/jmcb/mjab007/6122705). If the ATO trial for LFS is performed like metformin, it is clear that only LFS people with structural p53 mutations (R175H, R282W, M133T, and etc.) can theoretically get benefit from ATO treatment, if there is benefit. LFS people with DNA-contacting mutations (R273H/C and R248W/Q) should be excluded for ATO trial.