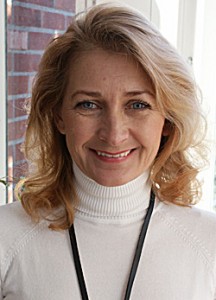 Professor Galina Selivanova (GS) heads a research group in the Department of Microbiology, Tumor and Cell Biology of the Karolinska Institute in Stockholm, one of Europe’s leading medical schools and research institutes. Her work focuses on re-activating TP53 using small molecule drugs, some of which are beginning to emerge into clinical trials. She is generally acknowledged to be one of the world’s leading researchers on TP53 as a medical target in oncology. Here Professor Selivanova answers questions on TP53 and Li Fraumeni Syndrome (LFS) for Pan Pantziarka (PP) of the George Pantziarka TP53 Trust.

PP: The reactivation of p53 by the compounds you are developing (RITA and PRIMA-1), look very promising – but do they only apply to people with functional TP53 that is only damaged in tumours? Would they work with inherited TP53 disorders?

GS: My lab is developing compounds which are aimed at restoring the tumor suppressor function of p53 in tumors. The idea behind p53 reactivation is that in almost all cancers p53 is present, but it is not working either because of mutation (for example, in LFS condition), or due to the overactive p53 inhibitors. p53 mutations, either sporadic or hereditary (in LFS), usually result in a substitution of just one amino acid residue in the p53 protein. This small defect could be “reverted” by binding of a small molecule – such as PRIMA-1 (commercial name Apr-246). This will make p53 active again. Active p53 is expected to induce cancer cell suicide. In contrast, normal cells, even if they carry mutant p53 (as in individuals with LFS), should not be affected because p53 does not kill normal cells upon its activation by non-genotoxic agents such as Apr-246 (genotoxic agents: chemotherapeutic drugs or irradiation) So, to summarize, I expect p53-reactivating compounds to be efficient in patients with inherited p53 mutation.

PP: What is the prospect of clinical trials using these new agents?

PP: Do we know about the pattern of TP53 expression in the tumours of LFS patients? Are they more likely to have TP53-null tumours, or are they similar to non-LFS tumours?

GS: In LFS patients, as well as in non-LFS patients carrying a p53 mutation, the p53 protein is usually present in ample amounts in cancer cells, whereas in normal cells it’s level is very low. This allows selective killing of cancer cells by p53-reactivating compound. It is quite rare for cancer cells to lose p53 and become p53-null, because mutant p53 is actually promoting cancer cell growth.p53-restoration

PP: You are uncovering more fundamental information on the function of the p53 protein, including effects on metabolism and the immune system as well as how it serves to trigger apoptosis. Are these other functions relevant to people with LFS? Can we expect to see metabolic or immune-related problems in them?

GS: We still have much to learn about p53 functions beyond it’s tumor suppressor role. It is possible that defective p53 might affect immune system and metabolism in individuals with p53 mutations. However, so far it’s only a hypothesis without any evidence to support it – except the data obtained in mice. But mice are not people…

PP: Is it possible that the part of the increased susceptibility of LFS patients to cancer is because of the immune-related effects of TP53, in addition to the control of apoptosis?

GS: As I said, the role of p53 in controlling immune response has been only suggested, but has not been proven experimentally. I think the major role in the tumor susceptibility of LFS patients is the inability of p53 to kill cancer cells.

PP: Should people with inherited TP53 conditions look for anti-cancer therapies that are p53-independent?

GS: Yes, I think so. There are some drugs which work better in cancer cells with mutant p53.

PP: In your view are people with inherited TP53 conditions likely to be amenable to drug treatments in the future, or is gene therapy likely to be the only solution?

GS: I believe in small molecules reactivating p53. I think it is a very good strategy! On the other hand, combining mutant p53-reactivating drugs with p53 gene therapy might be even more efficient. As for gene therapy for LFS individuals, one possible problem here is that some p53 mutants can bind and inhibit normal p53 introduced by gene therapy. We should take this in to account.

PP: Thank you for your time. I’m sure that the note of cautious optimism in your answers will be most welcome to people with Li Fraumeni Syndrome and other related disorders.